Discovering “Children Of The Comet” 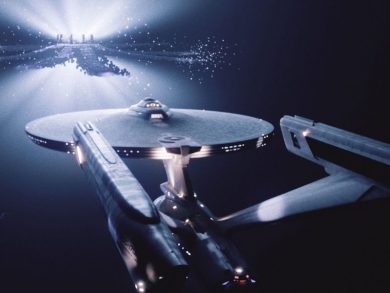 Go behind the scenes of the astounding new Director’s Edition of Star Trek The Motion Picture in 4K! We are thrilled to welcome David C. Fein and Daren Dochterman to talk about the painstaking and incredibly rewarding work that breathed new life into Trek’s big-screen debut.

It’s convention season again, and that means John and Ken will be on the road!

Then if you’re coming to Creation Entertainment’s massive Star Trek convention in Las Vegas, you can find John and Ken at the Roddenberry booth all five days along with the hosts and crew from Priority One and Women at Warp podcasts. On Thursday, August 3, be sure to attend the Mission Log panel “TNG 30: Trek in Transition.” As our coverage of TNG comes to a close, we’ll see how the passing of the torch affects the future of Star Trek’s storytelling. (Audio from this panel will be released as a podcast on Thursday, August 10. Mission Log will resume on August 17 with “Gambit, Part I” and “Gambit, Part II.”)

Those arriving in Vegas early be sure to come to the 8th annual “Landing Party” being held at the Masquerade Bar at the Rio Hotel. There will be trivia, prizes, and mingling with your fellow con attendees. Brought to you this year by Roddenberry Podcast Network, Larry Nemecek’s Portal 47, Bye Bye Robot, TrekRadio, TrekMovie and GeekNation Tours.

Finally – if you are in Southern California, make sure you catch The Improvised Generation, a hilarious and completely original improvised show in the style of Star Trek: The Next Generation. We saw their special performance at Comic Con and can enthusiastically recommend it to Trek fans and comedy lovers throughout the Federation. Performances are every Sunday night in August at 7:30pm at the Impro Studio. Follow @ImprovisedGen, and let us know if we’ll see you there for this away mission!