Star Trek may be fifty-plus years old, but based on the last twelve months it’s certainly not showing its age. 2022 was a landmark year for Trek, and while it may be too soon to say whether it was the franchise’s “best year,” it was arguably the “most Trek” year. Part or all of five TV seasons delivered, each from a different series. Fifty-one episodes streamed over forty-one weeks. Somehow, both starting and ending the year with Star Trek: Prodigy Season 1. From classic characters to new favorites, for adults and kids alike, and from serious drama to surreal comedy, Star Trek seemingly had something for everyone. So to celebrate, here’s a look back at the characters, events, and everything else that made 2022 memorable (for this fan at least).

Honorable Mention: The Star Trek Bottles Collection (featuring Wine and Spirits)
From pins to books to models, there’s perhaps nothing that Star Trek fans like more than a good collectible. Except, in this case maybe the packaging? No product in recent memory seemed to have captured the enthusiasm of some fans quite like the offerings of Star Trek Wines and Spirits. They feature not only quality drinkables, but perhaps more importantly, really cool (and with some, screen accurate) containers. 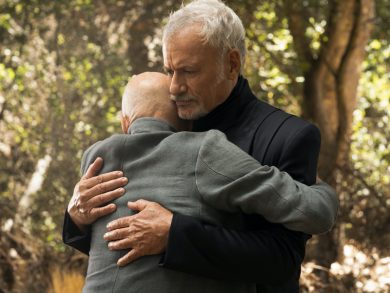 Patrick Stewart as Picard and John de Lancie as Q

10) Thank Q Very Much
The Season 2 finale of Star Trek: Picard saw the departure of many characters, however the most heartfelt goodbye turned out to be for Jean-Luc’s longtime frenemy Q. While some may quibble about the mechanics of the time travel storyline, Q’s final moments were deeply emotional, and exceptionally well portrayed by John de Lancie.

9) Starfleet All Stars: Assemble!
When holo-Janeway hooks him up with the infamous Kobayashi Maru test, Dal tries to game the system by calling up the best of the best for his crew, including Odo, Uhura, Crusher, and Spock. The Prodigy staff does a great job here utilizing the show’s animated format to bring performances from across the franchise together for one incredible story.

8) Coming Home
When Discovery zoomed off to the distant future of the Trek timeline, it found a Federation that was… missing something. Specifically, Earth. The devastation caused by The Burn had severed most of humanity from the rest of the galaxy. However, in the aptly named Season 4 finale “Coming Home,” that connection is reestablished courtesy of 2022’s arguably most unexpected cameo, Earth President Stacey Abrams.

Star Trek has had a knack of predicting the future – from turning PADDs into tablets, and communicators into smart phones, what we see on screen can often become reality. If so, can we try to wish Historic Bozeman into existence, please? This attraction visited by the Cerritos’ Lower Deckers is simply perfect: it has an E-ticket ride, a themed eatery, souvenir merchandise… everything you’d want in a “Star Trek Land.” Let’s. Make. This. Happen.

6) If the Suit Fits
As much fun as it was getting to know the kids on Prodigy for the first half of Season 1, they hadn’t quite felt to me like a proper crew yet. At least not until the two-part story “A Moral Star,” where they first put on their uniforms. The new suits (presumably cadet gear) look good too and help unify the team for a rescue mission worthy of any Starfleet crew.

5) Trope of the Year: Body Swap
Ironically this is a two-for-one highlight, as Star Trek did a pair of body swap episodes this past year: Spock and T’Pring on Strange New Worlds, and Dal and Admiral Janeway on Prodigy. While both scenarios were mostly played for laughs, they also brought new insights into each other for the participants. Kudos to each pair of performers for expertly capturing their counterparts! 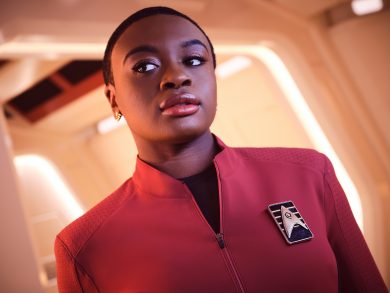 4) Uhura’s Journey
Sadly, we lost original Uhura actor Nichelle Nichols in 2022, but her legacy is in good hands on Strange New Worlds. Throughout Season 1, Celia Rose Gooding takes the then cadet Uhura on an emotional journey that mirrors Nichols’ own early relationship with Star Trek. By the end, Gooding’s Uhura finds her place on the Enterprise just as Nichols came to understand and accept her value within the series.

3) Return to Deep Space Nine
Circle those pylons all you like. When Lower Decks brought the Cerritos crew to DS9, it felt like the franchise was coming home again. It wasn’t just set dressing either: the episode also came with significant story material for Kira and Quark. Hopefully it won’t be long before we’re wandering the Promenade again.

2) Live Logs and Proper
Perhaps no episode in franchise history does a better job of explaining what it means to be a fan of Star Trek than Prodigy’s exceptional “All the World’s a Stage.” It may start out as a somewhat goofy look at aliens play-acting through various Star Trek stories, but it becomes an examination of what it means to live by their messages, and the examples set by the characters. 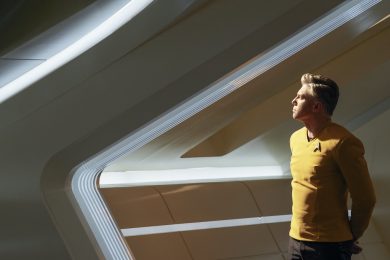 1) The Captain’s Speech
If Prodigy told us what Star Trek means for its fans, Strange New Worlds demonstrates what the franchise can still say to the world. In the climax of the first episode, Captain Pike holds a mirror up to our present day, drawing a line to events that nearly destroyed his history. The message is simple: we don’t have to go down that same road. We can start living for the “Star Trek future” today. We just need the courage to let go of things that divide us and work together towards solutions to our problems.