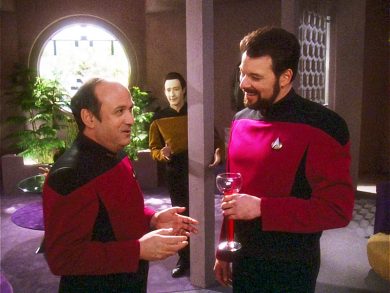 The Enterprise is due for a baryon sweep which means it’s the perfect time for the crew to get a little R&R. With no one minding the ship, it’s also the perfect time for a group of terrorists to steal a deadly compound from the engines. The one person they didn’t count on to thwart their plans, though, is Jean Luc Picard as Mot the Barber as John McClane.
Pass the Raisinettes, Starship Mine is next on Mission Log.