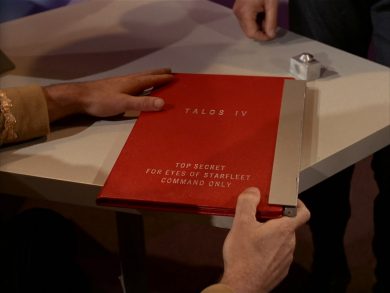 Like Picard learning about Darmok, Mission Log listeners may need to check in from time to time to figure out what their hosts are saying. There’s lingo, there are running themes, there are in-jokes and references galore. One of our industrious listeners, Alan Simonis, put together this handy (and evolving) guide:

The first mention of this divisive topic comes in the trivia, where John reads show notes describing Yeoman Colt and Number One as being emotional and “always the woman” in their concern for Captain Pike. Later episodes suggest that, despite their otherwise progressive attitudes, the writers and producers of TOS often came up short in their treatment of female characters.

Trek’s original BFF’s share a drink and ponder a future career in the lucrative field of Slave Trading – which is apparently a thing in the future. Captain Pike and Dr. Boyce’s close relationship evokes the camaraderie shown by later crews, and their conversation hints at the burdens of command and duty.

As the first aliens encountered on Star Trek, the Talosians become a frequent touchstone for future species – particularly powerful ones that, in the end, want nothing to do with humans. (See also: The Organians, The Metrons, Trelane’s parents, The Melkotians, ad infinitum)

A euphemism for a term one can’t say on a family show, when discussing mental powers.

“A legend you heard in childhood”

Ken posits that the visions used to torture Pike are of Hell, suggesting that such a notion is more fable than faith in Star Trek. This line comes up often during discussions of religion.

Soap Opera enthusiast Ken brings up actor Michael Zaslow whenever a guest star with a Guiding Light credit appears – or, when a red shirt dies primarily due to their own stupidity.

The opening line from a heavy-handed life lesson, like from a 50’s educational film. As such, it has become short hand for an obvious or didactic moral (See also: “Save the Whales,” “Bonk Bonk on the Head“ and “Don’t Eat Paint”) – although, it’s most often referenced when one is not apparent.

WHERE NO MAN HAS GONE BEFORE

While generally portrayed as a pacifist, Spock would occasionally go into “shoot-first” mode, particularly if Kirk happened to be in danger.

Famous for their pecan rolls, Stuckey’s is the kind of place you expect to find at the last exit on a highway heading absolutely nowhere – or perhaps at the outer edge of the galaxy.

A Dog in a Unicorn Costume

Both adorable and ridiculous, the Alfa 177 creature was… a less than convincing monster.

One thoughtful but passive – one decisive but brash. The dueling dual Kirks are a touchstone for discussions of personality and psychology.

WHAT ARE LITTLE GIRLS MADE OF?

It’ll get you every time… Star Trek generally frowns on attempts at living forever.

Sometimes, an episode raises more questions than it can answer in a 45-ish minute TV script. At those times, John and Ken will often remark that it might be better as a book.

DAGGER OF THE MIND

The most swingin’ social event on the NCC-1701. It’s unclear what confused John and Ken more about this soiree: the Christmas, or the Science Lab.

A reference unto itself – this episode is often held up as the Gold Standard of Star Trek morality, specifically for Kirk’s decision to rescue his former adversary, Balok.

THE SQUIRE OF GOTHOS

Say, isn’t Trelane an awful lot like Q? Mission Log’s own “Prime Directive” is to not discuss future events. And, like the other prime directive, it usually only gets mentioned when it’s about to be violated.

Hey- it was there all along! Sometimes a thing will magically appear when needed on Star Trek, only to never be heard from again…

THE RETURN OF THE ARCHONS

Star Trek’s number one rule gets its first mention. The Prime Directive is one of the most debated concepts in all of Trekdom – Ken often contends that the point of it is not specifically the non-interference, but rather that the Federation has a code to live by.

The all-powerful computer overlord of Beta III becomes the first victim of Captain Kirk’s Word Jujitsu. Landru is symbolic of technology gone haywire, or of a society that has become beholden to a caretaker.

In addition to being a noteworthy character in his own right, Khan is a fine example of a monumentally important historical figure that no one can seem to remember or identify.

A TASTE OF ARMAGEDDON

Let’s face it – Federation officials can be pretty useless. Here, John quotes an old SNL routine that suggests that becoming a diplomat only has one (rather pointless) prerequisite.

THIS SIDE OF PARADISE

Take a deep breath, everyone… In perhaps the most heated debate in all of Mission Log (thus far…), Ken argues that it’s wrong to take the Omicron Ceti III colonists away from the spores that provide them with health and happiness. The series contends – as do many listeners – that the spores rob people of their free will and ambition.

(But What of) Lazarus

Lazarus occasionally gets a mention during discussions of alternate dimensions and parallel universes. This is inevitably followed up by the infamous final line from this episode. (Editor’s Note: “Smooth Talking, Non-Head Wound Lazarus” is my favorite Mission Log description ever.)

THE CITY ON THE EDGE OF FOREVER

This episode marks the first mention of the classic moral dilemma, in which a subject could save one group of crash victims over another – and, how changing the stakes can affect the decision making process.

Sometimes Star Trek boldly goes somewhere, only to decide it’s far too dangerous for anyone else.

WHO MOURNS FOR ADONAIS?

Be they god or mortal, when someone needs a good moral-filled talking to, just call on James T. Kirk.

“When someone asks you if you’re a god…”

You say yes! John and Ken’s number one takeaway from Ghostbusters.

Can one really maintain a social order through backstabbing and power plays? John and Ken decide that societies based on “might” alone are probably doomed from the start.

And you’re gonna like it (whether you want to or not). Cultural imperialism is a-okay with Captain Kirk, so bibles and pants for everyone!

How to tell who’s in charge. Spock is an especially firm believer in the org chart.

Here’s a look at my Robot Guts

Well, how else was Norman supposed to prove he was an android? John’s line from the episode recap has been immortalized on countless Mission Log t-shirts.

THE TROUBLE WITH TRIBBLES

It’s Klingons vs. crew in the bar brawl to settle it all! Seriously, this fight may be longer than the show itself…

THE GAMESTERS OF TRISKELION

The official currency of Mission Log. Because on Triskelion, they don’t take American Express…

They forgot how to pronounce Lt. Kyle’s name in this episode – something that John and Ken will never let them forget.

When Mission Log wraps, John and Ken have a whole lineup of shows ready to go!

Warp Drive the Size of a Walnut

Can you even? This amazing technology is just one of the scientific wonders promised to the crew by super advanced aliens (usually in exchange for complete and total submission).

Just not a good sign ever. If Spock is grinning, something has gone terribly, terribly wrong…

BY ANY OTHER NAME

There’s nothing he can’t hypo! As the series progressed, Bones became more and more likely to shoot up the crew, with or without permission.

The episode title reminds John and Ken of their conversation with Mark Altman, who suggested that when Star Trek runs out of ideas, it usually “borrows” from to Shakespeare.

The moment where this episode loses John. “Checking out at the Flag” is shorthand for the moment in a Star Trek story where suspension of disbelief snaps clean in two.

Ken reenacts his dramatic reading of this episode title whenever there’s an ‘ultimate’ anything.

Another show that is a reference all on its own. Spock’s Brain is (for good reason) usually considered one of the worst episodes. Yet, underneath the goofy premise and dubious production, John and Ken found genuinely interesting ideas to parse through.

AND THE CHILDREN SHALL LEAD

A Lawyer in a Shower Curtain

What do you get when you put a non-actor in a pointless role and a stupid costume? Say hello to attorney Melvin Belli as Gorgan, arguably Star Trek’s least convincing guest villain.

“As you believe, so shall you do…”

Despite the… shortcomings in this episode, Ken is a fan of Gorgan’s self-help style mantra, calling it “the power of positive thinking for negative results.”

Sometimes a writer just needs a character to say something stupid. Too often that task was left to Bones, whose personality would shift to suit whatever the plot required.

How can you tell if someone is smart in the future? Star Trek’s answer is to go Greek! Robes (and often Laurels too) seem to be the de rigueur outfit for brainiac aliens.

WINK OF AN EYE

Of the five senses, taste may be the least utilized in space exploration – not on Star Trek though… John suspects there may be a rogue instructor at Starfleet Academy inviting unsuspecting recruits to boldly go and taste the universe!

THE LIGHTS OF ZETAR

THE WAY TO EDEN

They’re dirty… and hippies… and in space. Kirk the Herbert doesn’t grok their scene – but Spock reaches, man… he really reaches. Star Trek may or may not have seen the counter-culture as an enemy, but it definitely paints these space hippies as dangerous